There’s this huge sign on a main road near my house.  It says, “Can Your Four-Year-old Read This?” There’s some fine print underneath it to the effect of “If not, why not? Enroll them in our crazy private school and they will.”

Every time I drive past that place, I want to burn it to the ground.

I’d like to say that is because of my high principles regarding education and the preservation of childhood, but that would only be one quarter true at best. The real reason it kindles my normally well-controlled rage is that my six-year-old can’t read it.  (That and the fact that the sign is smug and awful, but mostly the six-year-old thing.)

My beautiful youngest child, the most original person I know, has not been quick to learn to read.

I blame all the stories.

I’ve posted several times here about Lucy, who just turned six and will start first grade in August, and her love of stories. Last week I gave you a sample of the weird and wonderful way her mind works. She is pretty clearly the most creative of my three children, and that is really saying something.

And yet. She’s not that interested in learning how to read.

Here’s the thing: right now, the slow sounding out of words is getting in the way. She wants a story, and reading it herself is the slowest way to get one.

There are a half dozen faster ways. Someone can read to her. She can flip through the pictures and make one up based on what she sees (this one is actually her favorite). She can toss the book aside and invent a story out of her head. She can ask someone else to make one up for her. There are several people in our house to choose from. 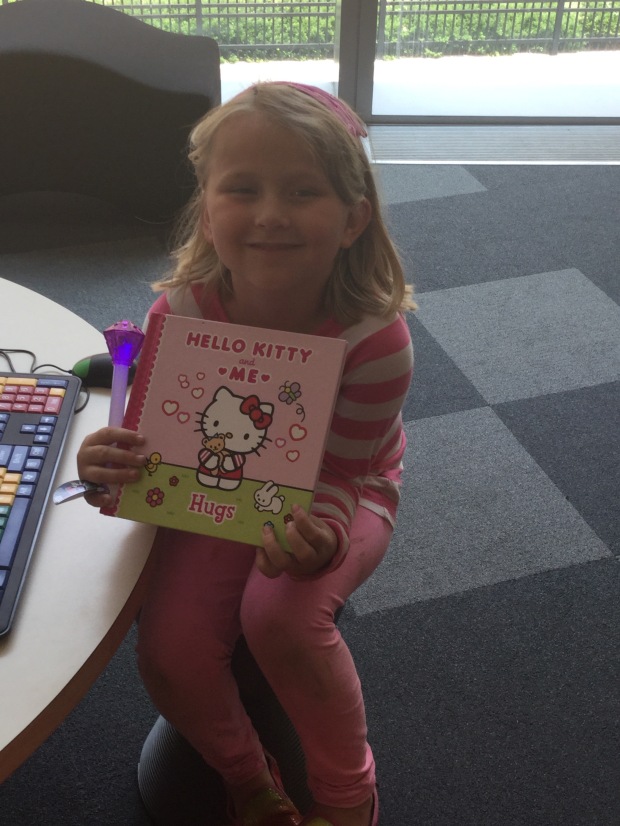 Believe me, her version of what Hello Kitty is going to do will be way more entertaining than whatever is written in this book.

So. She went to kindergarten. We did all the homework. We plowed through the little phonics books (most of which, gasp, don’t even contain actual stories!). And every single minute of it has been painful and horrible.

She is learning. Just exactly enough to be on the low end of normal for her grade level. But she is not excelling. She did not test high enough on standardized tests to get into the high ability program her brother and sister are in and where anyone who knows her can tell you she belongs.

Why I am I telling you this? I’m not publicly shaming my kid or unburdening my deepest fears or even humble bragging (much).  I just passed through a time this year of worrying about this issue, and I’ve finally gotten the monkey off my back, and I thought maybe, just maybe, I’m not the only one who worries about this stuff.

I will not be enrolling my daughter in the horrible private school down the street. I will not be spending my summer pushing her through reading courses.  I will possibly be defacing that sign in the middle of the night.

1. The research does not support the current craze for early reading.  You can read about this here, or here, or here. Or any one of a dozen other places. All the studies show that early reading has positive effects on school performance only for a very short time. After a couple of years, there is no difference between the performance of early readers vs. later readers. Long story short, this isn’t going to affect her life after another year or two.

2. Anecdotal evidence tells me the narrative intelligence she’s developed will be more than enough to turn her into a great reader when she’s ready.  My oldest daughter, who is ten and starting fifth grade in August, was a late reader, too. At the time I mostly attributed that to the fact that she was learning two languages at once, so I didn’t worry about it as much. (I still worried some because first child. Also, To a bibliophile there is nothing more terrifying the the idea that your kid might not love to read.) Worry or no worry, the fact remains that she didn’t learn to read on her own until halfway through first grade, which for her was age 7. This in spite of the fact that she has no learning disabililities and is highly intelligent.  She just wasn’t ready. But now? Now she has stacks of books everywhere and has to be nagged to turn off the light at night and can talk books with you for hours. This in spite of the fact that she is naturally extroverted and craves all things people and motion and excitement. This girl was raised on story, and in retrospect, I was ridiculous to waste a single second worrying that she wouldn’t love books or be successful in school.

3. It’s historically ridiculous that I’m even referring to this as “late reading.” When I was in kindergarten, no one learned how to read. I learned in first grade and didn’t start reading chapter books on my own until later than that. Did you? People didn’t used to even start school until they were seven. There are rumors that Einstein didn’t learn to read until he was nine. Those rumors are likely untrue, but there are also reports that he never wore socks, which is  likely true, and I think has some bearing on this matter because my daughter also hates to wear socks. I’ve lost track of my point… Oh yes the point is that we worry about too many things these days.

Go tell them a story. It will all work out.