We’re going to see the new Hunger Games movie today, and it’s got me thinking about all of my favorite books-turned-movies.  We need to get into this, I think.  This is a very important topic. 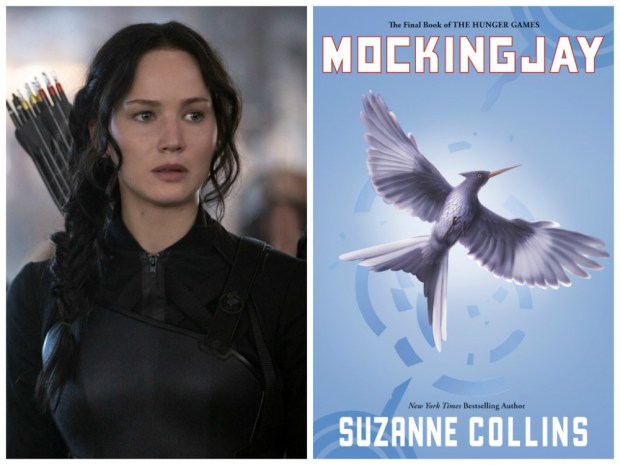 I really like movies.  Maybe not quite as much as books, but almost.  It’s because medium is not the issue.  Stories are the issue.  And good movies tell a story just as well (though quite a bit differently) as good books.  Someday we’ll dish on my all time favorite movies, but for today let’s just stick with the ones that were based on my all-time favorite books.

In fact, let’s narrow it down even more, and let’s deal with movies based on children’s and YA books.  We’ll do the adult version (why does that have to sound icky?) some other day.

To be clear from the start, the main thing I’m looking for when they take one of my favorite books and make it into a movie is that it capture the essence of the book.  It has to get the feeling right.   I’m not a crazy purist.  The medium is so different that it’s okay to mess around with the actual facts and features a little, but you have to keep the heart of it.  When you crush that, you ruin the whole thing.

Okay, let’s do this.  I’ll give you an overall rating for the movies that are in a series, but I’m going to have to add individual ratings for each movie, as well.  Each one will be given a letter grade on how it holds up as a movie all by itself, on how it adapts the story, and on how it captures the essence of the book.  I’m taking this seriously, people.

A+ (It Elevated the Book)

The Chronicles of Narnia – These movies get this category to themselves.  Here’s the deal:  those books are really short and (I say this with great love as I am a huge fan) lacking in depth and detail.  The movies round them out and give them life.  They are wonderful movies.  I absolutely recommend kids watching the movies even before they read the books, and if you keep reading, you’ll see that that’s really saying something.

Harry Potter – We love these movies.  Not as much as the books, but very, very much.  We come back to them time and again.  BUT.  I definitely made my kids wait until we had finished each book before watching the corresponding movie.  It was the right move.  There are so many, I’ll be brief in the breakdown:

The Hunger Games  – I haven’t let my kids read these yet, and they’ll definitely wait on the movies until they have.  I can’t wait.

Lord of the Rings – I’m in the middle of tormenting my kids with making them get through the books before watching the movies.  No regrets, though.  Those books are a masterpiece.  If you watch the movie and then ever read the book, you’ve basically committed a crime.  BUT, once you’ve read the book, you should definitely watch the movies.  They are wonderful.  I’m not breaking these down, because it’s basically all one long story.  A+ on its own merit.  If you like long movies, these are basically perfect.  A on adaption of story.  This was an epically difficult job, and they totally pulled it off.  Of course, it doesn’t stick perfectly to every detail (The Two Towers really should get a C here, because its the worst), but considering the scope, it’s amazingly faithful.  A+ on capturing the essence.  The work they put into the world, to the details of the different cultures, really reflects Tokien’s vision.  And it’s just stunning.

A Series of Unfortunate Events – My kids saw this movie before they read the books, but that didn’t stop them from totally enjoying both.  The movie only covers the first three books and changes quite a few things, but it’s so weird and delightful that it’s okay.  A on its own merit (the moment where they create a sanctuary is perfect in every way), C for adapting the story (they didn’t even really try to be faithful), A+ for capturing the essence.  They nailed the feeling of the books exactly.

Anne of Green Gables – Basically the first movie is lovely and faithful and you should watch it (before or after the books, it won’t really matter) and the second movie is okay as a movie but has nothing to do with the books, and the weird third movie should be avoided at all costs.  I’m not giving these grades because the above is really all I have to say about it.

Ender’s Game – Solid movie, but this book needed to be a miniseries.  A movie just didn’t have time to make you really buy his genius as a leader, and without that, something was lacking.  It was pretty faithful, but they were forced to skip over so much of his battle school experiences, and that weakened his character and the overall impact of the movie.  A- on its own merit, B for adapting the story, B for capturing the essence.

The Hobbit – Not nearly as faithful as The Lord of the Rings.  In fact, though I liked the first movie, the second one disappointed me enough that I’m not even excited to see the third.  I’m treating these as one, as well.  A- on its own merit.  Still better than most movies out there.  C for adapting the story.  It’s not the stuff they leave out.  They have to leave stuff out to condense to movie form.  It’s the stuff they add in that kill it (I’m looking at you, weird elf/dwarf love scenario).  B for capturing the essence.  They are doing a good job showing the growth of Bilbo’s character and of tying this in with The Lord of the Rings which is great, but they’re getting a little lost in the huge set pieces, which is pulling the focus away from the there and back again nature of the book.

F (This Will Ruin A Book You Love)

Where the Wild Things Are – If all the weird adaptions of Dr. Seuss books have taught us anything, its that you really shouldn’t try to put a picture book into a movie (unless you are doing a cartoon short a la The Grinch Who Stole Christmas) As a full-length movie, it’s a disaster.  This movie was actually painful.  Which didn’t just make me sad.  It made me mad because I love that book.

I’m sure we could do a bunch more, but I’ll leave it at that.  I mean, we could dish about this all day, and I’d never be tired of it.  But Mockingjay is waiting.

What do you think?  Am I wrong about these?  What am I missing?  Any other movies that really capture your favorite kids’ books?  Bring it on.

6 thoughts on “Seriously, It’s Worthy of the Book”