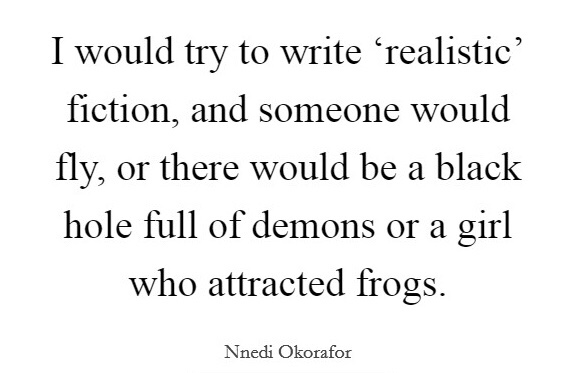 That about sums up what happens when I write, too. There’s too much magic in the world to pretend it isn’t there. This is why I’ve really loved reading Nnedi Okorafor. In her work, magic is an accepted part of the real world, though it isn’t a happy elven magic. More of the visceral and terrifying magic. An African magic.

Okorafor’s parents were Nigerian, both came to the USA to study and were forced to stay due to the Nigerian civil war. Nnedi was born and grew up in Illinois, but she began visiting Nigeria when she was young. She was a lover of science and a nationally recognized high school athlete until a complication in surgery to correct scoliosis ended in partial paralysis. That was when she began to write stories in the margins of her science fiction books. Eventually, she regained the ability to walk, but writing had become her life’s path.

Though Okorafor has written more than ten novels, I’ve only read two so far. Both are powerful stories of African women. Both women experience suffering in the form of racial oppression and misogyny. Both are filled with rage. Both rise up to change the world and even rewrite history.

― Nnedi Okorafor, The Book of Phoenix

I read The Book of Phoenix a couple of years ago. It was my first introduction to Nnedi Okorafor, and, appropriately enough, it burned a hole in my brain. Phoenix speaks, and her voice is powerful. She begins innocent, confused but also sheltered. By the end, she burns with rage. The whole book echoes with her fury. I’ll be honest with you, this isn’t the best written book ever. The other characters are a bit flat, and the plot jumps and wanders while motivations get blurry. But Phoenix is such a compelling character that I could not stop reading her story until it had burned itself out. She moved me.

“I was young but I hated like a middle-aged man at the end of his prime.”

Who Fears Death came to me much later, though Okorafor wrote it first. It’s better written than Phoenix, has many complex characters and relationships, and a plot that is more lineaar, though it isn’t the central point of the work. Onyesonu’s voice is angry, but it is a more controlled anger. It is more mature, which works better in a novel, but which I somehow found less compelling than Phoenix. Still, it carried the powerful drive to force a path ahead, through any number of awful things (and this reading is not for cowards) to a deadly conclusion.

“We’ll never know exactly why we are, what we are, and so on. All you can do is follow your path all the way to the wilderness, and then you continue along because that’s what must be.”

My favorite thing about Who Fears Death is the sense of inevitability, the fatalism that walks hand in hand with the rage and will to remake the world. It strikes me as a particularly African tension, and one that those of us who aren’t African can’t totally grasp. I can’t even put it into the right words. Of course, I can’t. That’s why you need to read Okorafor, and other writers like her, for yourself. Some things can’t be explained. They need to be felt.

I’m thankful to Okorafor for letting me share that world, even if just for a few hours.

“Science fiction is the only genre that enables African writers to envision a future from our African perspective.”

― Nnedi Okorafor, The Book of Phoenix