I told you last week that we would be doing our annual “write a Christmas story” day.  I was bracing myself a little bit.  I always worry that one year they’ll open the advent paper for that day and let out a loud groan.  Not this year!  They were excited!  I breathed a sigh of relief, handed them a pile of stickers and a few writing prompts and went to make dinner for a crowd while they got to work. 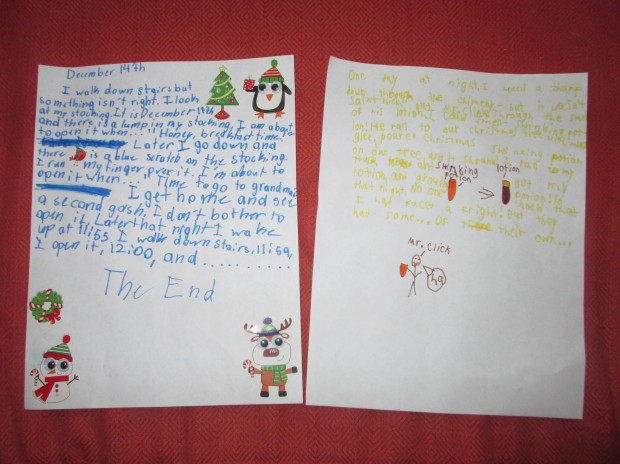 Ellie immediately went for the mysterious lump in the Christmas stocking idea.  She says the part with the blue scratch is “because I needed to cross something out and then I decided to use that as part of the story.”  That’s a kind of flexibility and resourcefulness I can get behind.

I walk downstairs but something isn’t right.  I look at my stocking.  It is December 14th and there is a lump in my stocking.  I am about to open it when… “Honey, breakfast time.”

Later I go down and there is a blue scratch on the stocking.  I run my finger over it.  I’m about to open it when… “Time to go to Grandma’s.”

It’s possible the girl has watched too many Twilight Zones.

Scott was interested in the shrinking Christmas tree.  He also decided to shoot for a rhyming story.  Sort of.

One day at night, I heard a thump down through the chimney – but it wasn’t Saint Nick, but Mr. Click!  Through the smell of his lotion, I could smell shrinking potion!  He ran to our Christmas tree with much glee, poured Christmas shrinking potion on our tree and it shrunk!  I ran to my trunk and got my lotion and growing potion!  So that night no one knew that I had faced a fright!  But they had some of their own…

Apparently he plans a few prequels, about the frights that the rest of the family faced.  The beauty of the rhyming part is that now we have Mr. Click!  He’s now totally a thing, like Festivus and the two moose that top our Christmas tree.

And yes, I might need to talk to my kids about how irritating cliff hangers can be.  But at least they write with glee!  And include our family! With punctuation they are free!

Seriously, I love love love reading the stories they write.

And please don’t hear me leaving out Lu, who is not quite ready to write out her own story, but who makes up the most thrilling tales anyway.  I recorded her telling a story in front of the Christmas tree the next day.  It is long and rambles because,  five-year-old.  But I’m proud to say that it’s about a monster who only comes out on Christmas Eve and that idea was all her own.  If you have some serious patience (and ability to interpret five-year-old speak), you can watch the video below. You’ll be rewarded with moments of very dramatic acting, so there’s that.

If not, Merry Christmas anyway!  May you receive no visits from Mr. Click and find no blue scratches on your stocking.  (Unless your holidays are getting boring, in which case, bring it on.)