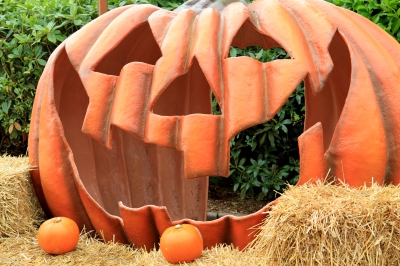 Even though I’m all about ghost stories (that don’t involve zombies) I think I’m just about done with the scary stuff for this year.  It’s time to laugh a little, don’t you think?

With that in mind, I bring you this little tale that is absolutely NOT written by me (I found it here.), but which made me laugh and which I’m dying to tell to my kids tonight.

Chris Cross, a tourist in Vienna, is going passed Vienna’s Zentralfriedhof graveyard on October 31st.  All of a sudden he hears some music.  No one is around, so he starts searching for the source.  Chris finally locates the origin and finds it is coming from a grave with a headstone that reads: Ludwig van Beethoven, 1770-1827. Then he realizes that the music is the Ninth Symphony and it is being played backward! Puzzled, he leaves the graveyard and persuades Tim Burr, a friend, to return with him.

By the time they arrive back at the grave, the music has changed. This time it is the Seventh Symphony, but like the previous piece, it is being played backward. Curious, the men agree to consult a music scholar. When they return with the expert, the Fifth Symphony is playing, again backward. The expert notices that the symphonies are being played in the reverse order in which they were composed, the 9th, then the 7th, then the 5th.  By the next day the word has spread and a throng has gathered around the grave. They are all listening to the Second Symphony being played backward.

Just then the graveyard’s caretaker ambles up to the group. Someone in the crowd asks him if he has an explanation for the music.

“Oh, it’s nothing to worry about” says the caretaker. “He’s just decomposing!”

I’m sorry.  I am.  I like puns.  Especially if they’re part of a whole story and not just a question/answer joke.

For kicks I’ve been sending one or two of these fun little Halloween jokes in my kids’ lunches this week.  I decided to go for it, even though, to be honest, I was half-expecting them to come home rolling their eyes and telling me to stop being so…Momish.  But they didn’t.  They came home laughing and telling each other the jokes they’d gotten.  They love them.

Aaaand that’s why you keep trying things as a mom.  Because you just can’t ever predict what they’ll think is fun.  And who wants to miss out on fun just because you were afraid of being mocked?!

I mean, isn’t that the point of Halloween?  To have fun at the risk of being mocked?  So go for it.  Break out your worst puns today.  Word play is good for the soul.

And let’s face it, your kids are going to think you’re weird no matter what you do.  Might as well lean into it.