Once upon a time there was a baby snake named Ssabastian.  For the longest time he looked exactly like all the other snakes.  His skin was green and brown.  His body was long and skinny.  His tongue was pink and forked.  Ssebastian’s mother loved him very much and taught him all about how to hunt for small animals to eat and how to stay out of the way of dangerous birds of prey.

As Ssebastian grew, he got very good at hunting for small animals.  Very, very good.  He often caught dozens of mice each night, not to mention the odd squirrel or chipmunk.  And since he always ate everything he caught, Ssebastian grew at an alarming rate.  His mother was alarmed.  His friends were alarmed.  It goes without saying that all the small animals in the forest were extremely alarmed.

Ssebastian grew and grew and grew.  The bigger he got, the better he was as hunting.  Soon he could catch rabbits and then racoons, and once he even caught a fox.  By this time, Ssebastian was longer than the old pine tree which had fallen over just before his birth and nearly as big around.  Ssebastian’s mother still loved him very much, of course, and now she began to worry that he would attract attention from something far more dangerous than birds of prey: humans.

Luckily, Ssebastian’s mother was a very intelligent snake.  She decided to make a disguise for Ssebastian.  Taking the bark off of many fallen trees, she pieced together a new skin that Sebastian could slither inside.  When he did this, if he lay perfectly still, he looked just like a fallen tree himself.  In this way, she planned to protect him from the notice of humans and so keep him from being killed out of panic or worse, put into a zoo for children to gawk at.

Ssebastian liked his new disguise.  It was fun to pretend he was a tree, at least at first.  He lay very still and smelled the lovely sappy smell of his bark and watched the clouds go by overhead.  After a while, though, he started to get tired of lying still, and his skin began to itch.  He longed to slither through the forest and to coil around the trees and scratch his skin on their branches.

Ssebastian looked around at the other trees.  He saw how they swayed in the wind and thought to himself that he didn’t need to be a fallen tree.  He could slither around in his disguise and be more like a living tree which moved back and forth as much as it wanted.  So Ssebastian began to move.  First, he just rolled over, and that felt so good that he slithered over to some trees and arched against them.  Their bark scraped against his in such a pleasant manner that he stretched higher and higher, reaching for their branches.  He let the branches brush against the back of his head and then ducked his head down and let the branches slide down his back. 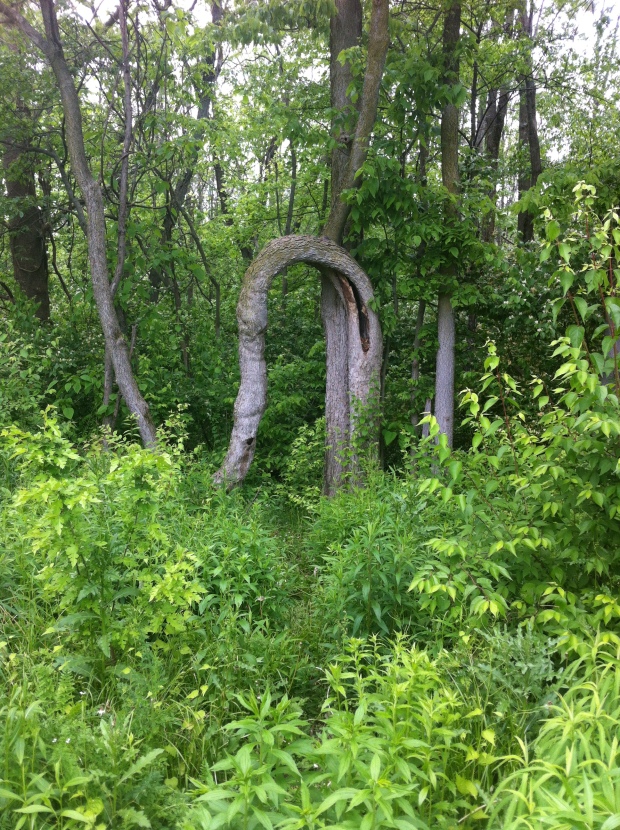 At this exact moment, two human children came walking through the woods.  Ssebastian froze when he saw them coming.  He was in a very compromising position: his tail in the trees, his back swooped down low and then arched high into the air, and his head ducked down in the grass.  It was too late to move, though.  The children had seen him.

Luckily, his bark disguise was very well-made.  The children began to exclaim about the cool shape of this tree, and Ssebastian thought he was home free when suddenly they started to climb on him.

“I’m going to do flips!” said the other child.

“Bet you can’t hang by your ankles!” the first child answered.

They did.  They did all those things.  Poor Ssebastian had to hold perfectly still as the children slid down his back and climbed up again, as they gripped his bark and swung back and forth, as they bent their knees around his middle and hung upside down.  His back was hurting dreadfully, and he didn’t know how much longer he could hold his position.

Now Ssebastian was a very kind and friendly sort of snake (friendly toward everyone except small animals, of course, and even that was only because he was so hungry all the time).  As uncomfortable as he was, he actually found himself liking these little humans.  They laughed and shouted and sounded like they were having so much fun that he could hardly stop himself from trying to join in.  He tried to remember all of his mother’s warnings, and to think about her stories of the horrible zoo, but between the pain in his crooked back and the sound of laughter all around him, he couldn’t seem to remember what was so bad about these humans.

All at once, Ssebastian let his back drop, lightly setting down the child who had been clambering up it.  It felt so good to finally be released that SSebastian rolled over twice and let out a hissss of pleasure.  The children screamed.  Very loudly.  SSebastian curled around them protectively, just as his mother had done for him when he was scared as a tiny snake.  The children screamed even louder and started kicking his sides.  Ssebastian thought maybe this was a new form of play and tried to nuzzle the children with his head.  They screamed louder than any noise he had ever heard.  Then one of the children grabbed a stick and started hitting Ssebastian.  This broke open some of Ssebastian’s lovely bark disguise.  The children kept on yelling.

The nose was beginning to be almost as painful as the climbing had been, and if these children kept on hitting him, his whole disguise would be ruined.  Ssebastian realized now why his mother had wanted him to remain unseen.  He wished he had listened to her.  He wondered if it was too late to pretend to be a fallen tree again.  He decided to try it.

Ssebastian lay completely still on the ground, stretched out straight and flat.  The children cried in triumph.

“I killed him!” yelled the child with the stick.

“He’s dead!” yelled the other child.

“Let’s go tell Davey that we killed a snake as big as a tree!” yelled the first child.

The two children ran off through the trees to brag of their adventure to all their friend, none of whom, fortunately, believed them.

As for Ssebastian, he had learned his lesson.  His mother made him a new bark disguise, and Ssebastian spent many long hours lying silently inside it, resting and thinking about the peaceful lives of fallen trees.  Only at night, when it was too dark for anyone to see him, did he come out to do more hunting.  This restriction in his hunting time was a good thing for everyone.  The moderation in his diet kept Ssebastian from growing even larger than he was, and the small animals of the forest, of course, were quite relieved.