Editor’s Note: We don’t get to actually see Papa Jones very often, but we are this week, so today’s story was invented by Papa and comes complete with pictures of the moment of telling. It was well worth watching, believe me. It’s going to be hard to say good-bye again tomorrow.

Once upon a time there were five kids, and they were all named after colors. There was Red Girl, Blue Boy, Pink Girl, and Green Boy. And the littlest of all was named Brown Baby. The five kids got along very well, except for one thing. Little Brown Baby was a squealer. Just when they were all in the middle of playing, Brown Baby would squeak her loudest squeak or screech her loudest screech, and they would all cover their ears and complain. Those kids were really annoyed by Brown Baby and they tried to stay away from her when they could.

One day, all five kids went down walking by the river. They were just walking along when they saw something in the water.

Blue Boy had a point. That green thing in the water just kept getting bigger and bigger and rising out of the water. All five kids started to get very scared. Suddenly a big head attached to a long, long neck shot up out of the water. An even bigger body started to rise up, standing on four sturdy legs. It was a creature that looked just like a Brontosaurus. The kids were frozen with terror. 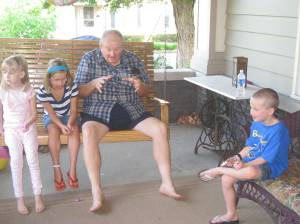 When it spotted the kids, the creature opened its giant cave of a mouth and started to reach its long neck toward them. They were all yelling. It came closer and closer with its mouth to eat them, but at the last second it suddenly shuddered and pulled back, shaking its head. The kids looked around but couldn’t see what had scared him off. Whatever it was, it didn’t last for long because here came the mouth again, gaping wide, coming straight for them! Again, just as he got close, the creature cringed away. This happened several times. The giant mouth reaching then jerking back. 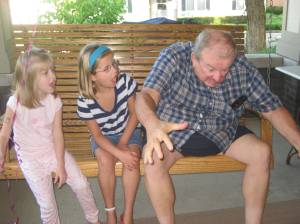 Finally, the kids realized what was happening. Every time the creature reached out to eat them, Brown Baby would let out her loudest shriek. The noise was hurting the creatures ears and causing him to pull back. The older kids cheered. One last time, the gaping jaws stretched toward the five kids. Brown Baby let out the loudest, most piercing scream she had ever used. The creature rocked back, trembling, and finally plunged under the water again.

After that, the kids didn’t mind so much playing with Brown Baby, even when she was squealy. And they never took a walk by the river without bringing her along.

One thought on “Five Color Kids and a Scary Monster”