Can we take ourselves a little less seriously today?

Lately I’ve been writing and writing and thinking and then writing some more.  Working on word choice. Polishing things up. Trying out new things. Wrestling with big thoughts. That’s cool. It’s part of the process.

Remember when we were just making up silly stories for our kids? Yeah, there was one about a house that defended its people against a monster.  And another one about the politest pirates on the seven seas.

I think I need a few more super ducks in my life.

My husband, the world’s most serious man, is actually responsible for reminding me to lighten up this week.  He did it by telling my daughter a story.

Once upon a time there was a Mexican turkey named Felipe. He lived in Mexico his whole life and never travelled to the United States because he heard that people eat turkeys here.  But one day, he got a chance to take a vacation across the border and he couldn’t resist.  He was having a great time until he realized it was November, the worst time to be a turkey in the United States!  Suddenly, he was in danger of being eaten! He ran to the other turkeys and they took him to the turkey cave, where turkeys go to hide out until Thanksgiving is over.  He stayed in the turkey cave until the coast was clear.  Then he went straight back to Mexico and never came to the United States again.

Yep, that’s the whole story. It took about five minutes to tell, with whatever tiny bit of energy he had left over at the end of a long work day. But you guys, she thought it was hilarious. She has told it at least three times to different people since then. Only she gets the name wrong and calls him Felipo instead, which really just makes the whole thing even better. 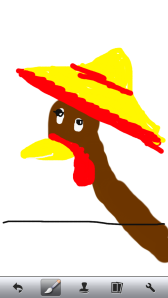 I told you we were keeping it light. Nothing is lighter than me drawing a turkey with a sombrero on my Doodle ap.

What do you think? Are you feeling inspired? If I can doodle a brown blob and call it a turkey, you could make up a story like that.  You know you could.

Let’s tell stories today and not worry if they aren’t masterpieces, okay? Heck, they don’t even have to make sense.

I mean, they probably eat turkey in Mexico, too.  Just don’t tell Felipo.

This one is a story I heard my husband telling my youngest daughter.  Short and sweet and not my own, but too charming not to write down and pass along.

Many times her father, worn out from a long day of working in his shop, would ask the little girl to tell him a story instead asking for a new one, but she always replied, “No, father, I couldn’t.  Your stories are so wonderful.  You must do the telling.”  And she was so sweet and beautiful that he would put aside his weariness and tell her yet another story.

Well, things went on this way for a very long time, and it came about that both father and daughter began to notice something strange.  The little girl’s head was getting bigger.  At first it was just a little bigger, so that you could hardly notice it if you did not know her very well.  They thought nothing of it.  Little girls do, after all, grow up.  But her head was growing up much faster than the rest of her.  In time, it had swelled enough that even strangers would notice it.  The little girl was still very beautiful, so people mostly didn’t comment on it, but the little girl herself began to feel a bit worried.  Day after day and night after night, her head grew and grew and grew, until one day the most awful thing happened.

The little girl floated right up off the ground.

Floating off the ground might sound sort of fun, but it is very scary if you don’t know why it is happened and you cannot make it stop.  Unfortunately, the little girl had been outside picking flowers when the floating began, so there was really nothing to stop her going up and up and up.  As she floated past the apple tree, she grabbed hold of the topmost branches and held on for dear life.  That is where her father found her when he came home from his work.

A shouted conversation explained what had happened and her father began to climb the tree to fetch her down.

“Father, I’m so scared,” she said as he climbed.  “Please tell me a story to calm me down as I wait here.”

So he began to tell her a story, and as he did, her head swelled even more.  It swelled so much that she could not longer hold onto the branch, but was tugged free and began to float up into the sky.

And so she did.  Right there in the air as she drifted over the tree tops, she told all the stories she could think of.  Stories of pirates and dragons, of princesses and gypsies, of talking bears and crying flowers came pouring out of her mouth.  And as she talked, her head slowly shrank back to a normal size and she drifted down, down, until her feet were resting on the ground.  Now that she had started, she could not stop, though.  She talked and talked even as her father carried her home and tucked her up by the fire.  She talked and talked until all the stories in her head were finally out.  It was the best night of her father’s life.

Nothing ever changed how much the little girl loved stories.  In fact, her little adventure made a very good story itself.  But even though she still asked her father for stories every day, she would always take her turn telling the ones she had thought of when she was alone.  And the two of them lived very happily ever after.

This is actually a story my husband invented. I was going to make him write it up, but he was a little busy getting his new book out this week. Still, it’s one of my kids’ favorites, so naturally it has to be immortalized here. There isn’t much to it, but just insert your kids’ names and use your dopiest possible voice when you say, “Oops! I forgot!” and preschoolers are going to love it.

Once upon a time there were two kids named Ellie and Scott who really wanted a pet.  Every day they would ask their dad to buy them a dog or a cat or even a fish, but he never did.  Then one day, while the kids were playing in the forest when they found a stray animal.  It wasn’t a dog or a cat; it was a giant hamster.  Now, a  hamster should be a small furry creature, like a mouse with a very short tail.  But this was a giant hamster, so while he was till furry and still had a stubby tail, he was roughly twice as big as Ellie and Scott’s dad.  The kids were delighted.  They named their new pet Hammy and took him home to dinner.

You can guess what happened.  Their mom took one look at that enormous hamster and said, “No way!”  She sent them straight back into the forest to put Hammy back where they found him.  Ellie and Scott were disappointed, but they decided that they would visit Hammy every day in the forest and train him to behave and teach him tricks so that he could show their mom what a good pet he would be.

From the very first day, they could see that they were going to have trouble.  Hamsters will eat almost anything, and Hammy was a giant hamster.  That meant that as often as not, what he wanted to eat was Ellie and Scott.  They carefully explained to him that hamsters should not eat kids and that they couldn’t play with him any more if he kept trying to eat them. Then they taught Hammy how to play tag.

Playing tag with Hammy was super fun.  You could duck right under his legs and out of reach before you got tagged.  But, when it was Ellie’s turn to be “it,” Hammy snatched her right up and started to chew on her arm.  Scott stamped his foot and yelled as loudly as he could, “No, Hammy!  No eating Ellie!”

And Hammy said, “Oops!  I forgot!” and dropped Ellie back to the ground.

They gave up on tag and started playing hide and seek.  Hammy was too big to be good at hiding, but he was a great seeker…at least until he found Scott.  Then he snatched Scott right up and started munching on his leg.  Ellie jumped out of her hiding spot and screamed, “No, Hammy!  No eating Scott!”

And Hammy said, “Oops!  I forgot!” and dropped Scott back to the ground.

Instead of getting better, Hammy’s forgetfulness got worse and worse every day.  One day, while they were all playing Prince and Princess, Ellie turned around and couldn’t see Scott.  Then she saw a foot sticking out of Hammy’s mouth.

Hammy just shrugged.  From inside Hammy’s mouth, Scott shouted, “Hammy!  No eating me!” and he boxed Hammy’s teeth very hard.

Hammy spit Scott out and said, “Oops!  I forgot!”

That was when Ellie and Scott knew they could never take Hammy home as a pet.  They still wanted to play with him in the forest, though, because he was so much fun.   They thought and thought about what they could do until Ellie had a great idea.  They ran home and got to work with some paint.

And after that day, anytime they wanted to go play with Hammy, Ellie and Scott always wore the same white shirts with bright red letters that said, “No eating me!”